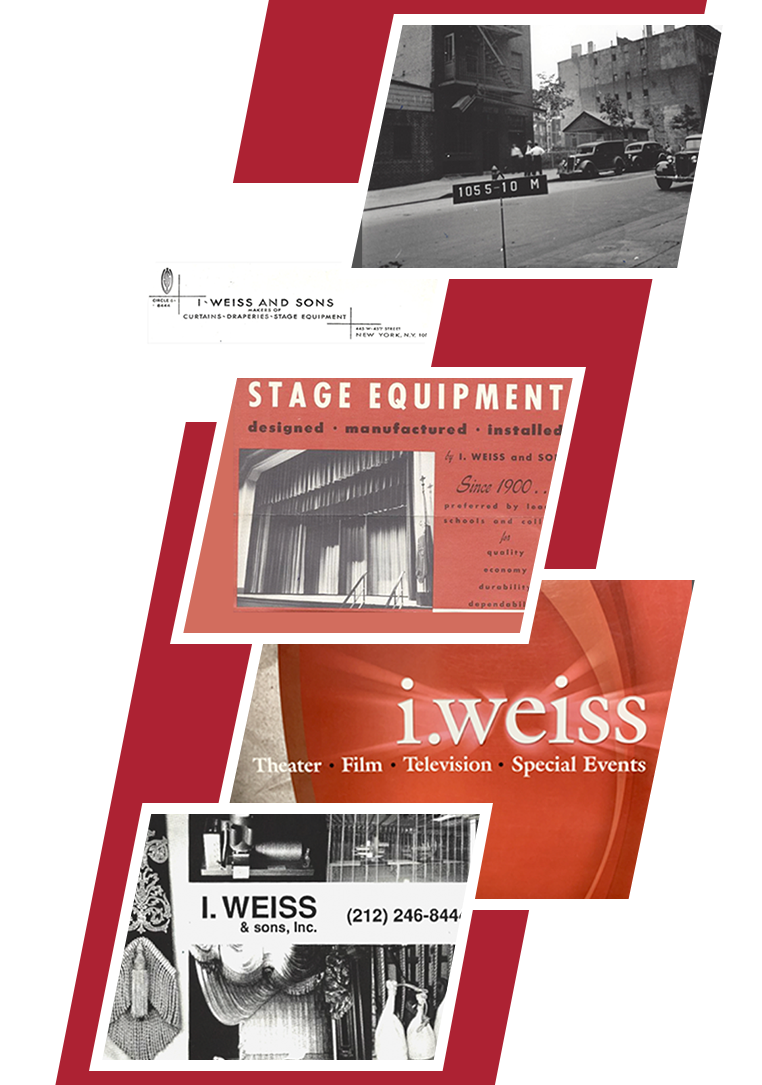 IWEISS Standing Tall on its Roots

Today, IWEISS has offices in New York, Illinois, and Missouri – in addition to its headquarters in New Jersey. The company has more than 75,000 square feet of manufacturing capabilities across the United States. IWEISS’ renowned work can be seen in theaters, performing arts centers, and educational facilities all over the world.

But it all started in an unassuming little building in New York City more than 100 years ago.

In 1899, Isadore Weiss started a small upholstery shop in mid-town Manhattan, in the heart of what would soon become the most famous theater district in the world. IWEISS quickly built a reputation for high-quality work and efficiency. So, it came as no surprise that prop men from nearby theaters often called on IWEISS for furniture and drapery for their shows.

Two of Isadore’s sons, Mac and Henry, began expanding the company’s exposure by manufacturing drapery for Broadway shows and famed venues including Radio City Music Hall, the Metropolitan Opera House, and many others.

While Mac took the lead on the textile side of the business, Henry set his sights on introducing schools, hotels, and theaters up and down the east coast to not only custom drapery, but also manual rigging installations and stage machinery. By the 1950s, IWEISS had acquired the rigging and manufacturing equipment of Bruckner-Mitchell. The company continued to build on that side of the business and hasn’t looked back since.

Though business slowed in the ‘70s, tides would soon turn. Mac’s son, Steve Weiss, took the helm in the early 1980s and hired new partner David Rosenberg in 1985. David, who became majority owner, grew IWEISS from a small company with fewer than five employees to a thriving industry leader. Some of that expansion came as a result of IWEISS producing drapery for legendary shows like Phantom of the Opera, Cats, Les Miserables, and more. These sell-out Broadway shows and national tours made IWEISS a name synonymous with success in the drapery industry.

Then, in 1994, Rosenberg hired Jennifer Tankleff as the office manager and by 1997 she took over the management role of IWEISS drapery shop. During her time in that role, Jennifer worked with numerous designers to produce drapery for more than 300 Broadway shows, as well as for hundreds of performing arts centers and educational facilities across the U.S. and abroad. Jennifer went on to take full ownership of IWEISS in 2017.

In 2019, IWEISS partnered with Said Louis, the new CEO of the company. Though some names and faces have changed over the years, some very important things remain the same. We truly understand your needs and we pride ourselves on our ability to provide personalized service— every job, big or small, receives the same careful attention. We believe just about anything is possible, and we welcome creative challenges. Working in both new construction and historical restoration, our staff comes armed with a deep knowledge of the theater industry and a commitment to excellence.

We look forward to continuing to evolve and grow in our ability to provide our customers with superior quality. And, as we look toward our future, we can’t help but remember where it all started—in that little upholstery shop in mid-town Manhattan.

Navigation Menu
About Us History of IWEISS