The Ziff Ballet Opera House at the new Adrienne Arsht Center for the Performing Art in Miami features the Hibiscus Grand Curtain, one of several works of art funded by Miami-Dade Art in Public Places exclusively for the center. New York based artist Robert Zakanitch was commissioned with the creation of a “painting” that functions as a House Curtain.

Hand-painting a 60′ x 40′ curtain with fullness, however, would have required an inordinate amount of time and unreasonable funds. IWEISS suggested the use of digital printing on velour and worked with Zakanitch from concept to completion over the course of three years.

The original art, a 9′ wide by 20′ high painted velour sample, was shot by an art photographer, and the large format negative was scanned to get a digital file with the highest possible resolution. This file was manipulated and resized to the actual scale of the curtain. Several models and approval rounds later the finished art was sectioned to be printed on individual fabric rolls. After the artist added his finishing touches to the panels they were carefully matched and sewn to create the finished piece. IWEISS was charged with designing the best construction method for a beautiful functional house curtain that enhances the visual impact of the art.

The Hibiscus Grand Curtain is a pioneer in its class as an “art curtain”. Being part of the creation was an honor and a great experience. 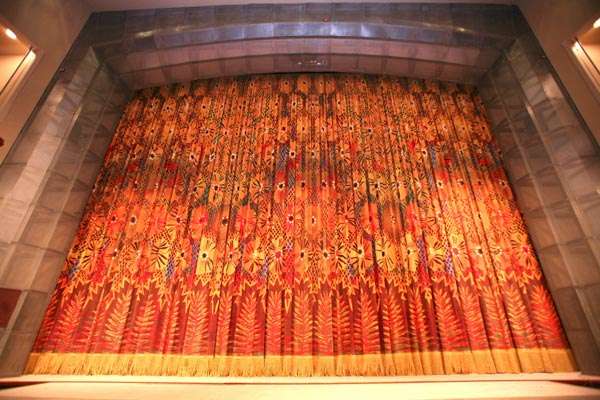 Visit our Portfolio Page for other examples of Digital Printing