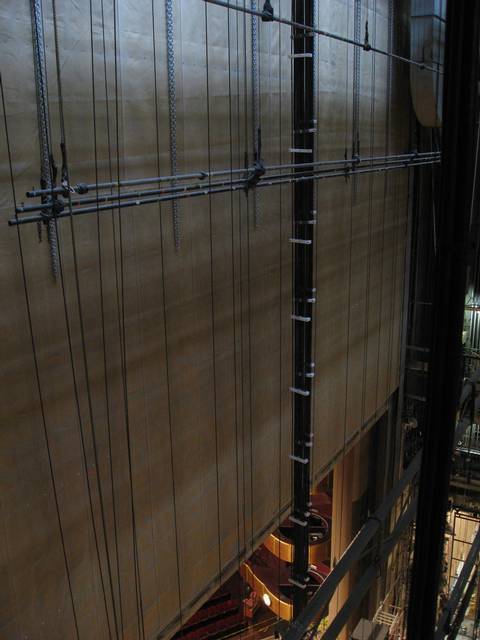 IWEISS is proud to have played a significant part in the renovation of the David H. Koch Theatre at Lincoln Center by providing an acoustic steel fire curtain, eight motorized light ladders and a motorized line set, along with the installation of the new orchestra pit lift system provided by Serapid. The Acoustic Fire Curtain, the first of its kind, is actually a fire wall that serves a dual purpose. First and foremost it is a traditional fire safety curtain that descends in case of an emergency, it also acts as a reflective orchestra performance “shell” and a sound proof divider between the orchestra pit and stage allowing for two separate rehearsal activities to happen simultaneously.

Working closely with Schuler Shook consultants and engineer Steve A. Walker Associates, I.Weiss senior project manager Richard Parks coordinated the design, construction and installation of the final product, a 66’ wide x 43’ high steel frame with a painted 18 gauge sheet metal face, two different interior acoustic barriers, and a Zetex backing. The winch that operates this 23,000 lbs steel wall was engineered and fabricated by J.R. Clancy. It weighs 2,300 lbs, and has dual hydraulic speed controls for safety allowing the fire curtain to “free fall” to meet code. The custom arbor is 30’ tall and contains 290 counterweight bricks weighing 73 lbs each. The Motorized Light Ladders are mounted with trolleys to 11’ long I-beam sections for lateral movement up and down stage, while each I-beam is, in turn, motorized with a dual drum line shaft for vertical movement thus providing a much greater number of lighting positions for the theater. The line shafts were mounted on 2’ custom steel stanchions for greater access to the grid. Each ladder measures 3’-6” wide by 18’ high with a 1,200 lb capacity. We also added an additional variable speed line set with a total travel of 84’, achieved by a line shaft system with seven cable drums.

In addition IWEISS had the opportunity to work with Serapid and their senior project manager Bruce Downer to install the new orchestra pit lift system consisting of three lifts, all variable speed, capable of moving 20’ per minute and lifting 95,000 lbs. During the course of this renovation Richard Parks oversaw four IWEISS field supervisors, two Local One IATSE crews, and an Iron Crew working a combined day of 7:00 AM to midnight to meet the demands of the Owner’s Schedule. The project was finished on time and on budget, allowing New York City Ballet and New York City Opera to resume performances with some fabulous new technology at their disposal. As anyone who attended the Grand Opening can attest, it was well worth it.