F-18 – The National Museum of the Marine Corps 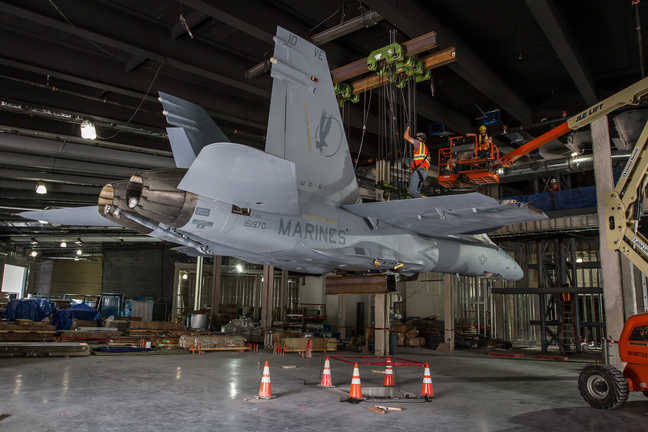 Back in 2013, The National Museum of the Marine Corps contracted Century Aviation of Wenatchee, WA to restore an F-18 Hornet that was stationed at Andrews Air Force Base. This happened to be the first Marine Corps plane in the air following the 9/11 attacks.

Century called upon IWEISS for its engineering & rigging expertise to supervise the removal of the aircraft for transportation to Washington and for the later installation in the new wing of museum. The challenge for IWEISS was the requirement that the plane be mounted on a stand in an attack approach angle.

Under the leadership of Russ Dusek, head of IWEISS’ mid west division the design process began. The military removed the weapon systems and classified electronics and fluids were drained but the sleek fighter jet still weighed in at 22,000 pounds.

Russ began the design process with Daniel Clark of Clark Reder Engineering and IWEISS fabricated the 4,000 pound steel mounting stand that would anchor to a subgrade foundation using eight 1-1/2” diameter steel anchor rods. The base of the stand sits in an 18” deep hole that will be back filled to floor level.

This Fall, three years later, the restored plane had its wings and tail removed and was wrapped for the 3000 mile truck trip back to Quantico. During its trip, Russ supervised a crew installing 3000 lbs. of temporary steel structure to the roof steel of the museum and hung four 10 ton  “Ultra-Low Headroom Trolley Hoists” manufactured by Harrington Hoists and Cranes.

Having previously lifted the plane for removal, Russ understood that the center of gravity was located at the pins and structure that connected the wings to the fuselage. During restoration, Century Aviation modified the 2-1/2” diameter connecting pins so that IWEISS could connect ½” wire rope assemblies for lifting the plane onto its stand. The trailer with the fuselage was guided under the lifting steel and the installation process began. Once the fuselage was supported, the wings and tail section were attached and the trailer driven away.

Russ then worked on getting the stand hoisted into place and bolted in. Working with the 4 trolley hoists the plane needed to be banked into a 45 degree attack angle position and locked into the frame.  Once secured, the cables and lifting steel were removed and the restored fighter jet was set for the new wing of the museum to open next year.  The crew’s last task was the mounting of a fully functional sidewinder missile (ordinance removed) under the left wing.

IWeiss is extremely proud of Russ’ management of the project from design to installation. Russ acknowledges the following invaluable partners:

Navigation Menu
F-18 – The National Museum of the Marine Corps