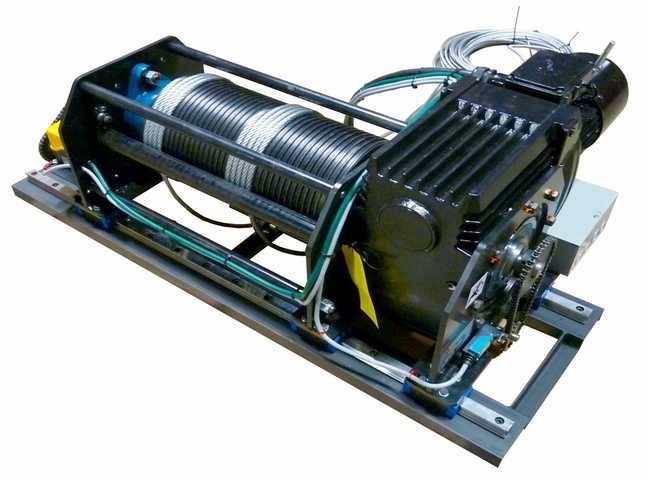 IWEISS is involved in the restoration of an F-18 Fighter Jet.  More details to come, but if you watch closely you will see the one and only Russ Dusek.

For an update on the final restoration and relocation of the F-18 Fighter Jet, click here!

When we were contacted to manufacture a custom lifting winch with a 1 ton capacity and 35 feet of travel at 60 ft. /minute.   Automation & Production Manager Paul Kelm rose to the challenge to deliver the machine in 2 weeks, fully engineered and built.

There are many challenges that go into the production of nearly all automated equipment and those challenges take time.  For example, designing a machine that requires engineering approval not only involves creating a detailed 3D model, but also a comprehensive set of paper drawings. Once the design is approved, procuring the custom parts generally takes 4-6 weeks followed by a week for assembly and testing.  In this case, the application also required new control software to be written and tested.  Obviously two weeks should be impossible.

It is in these difficult situations where outside the box thinking is required and IWEISS excels, not only in automation, but in all aspects of our craft.  On the automation side, the company has a structure that is setup to be small but nimble.  While we can produce the large jobs with dozens of stock winches, we can also put our heads together and, in a matter of hours, have a design sketched out for nearly any custom machine you can imagine.

In this case, we leveraged our resources and within 8 hours of being awarded the job, a complete drawing package was out to engineering for a stamp of approval.  At the same time, we were able to utilizeour agreements with vendors to get long lead components quickly.  Also, many had to be custom fabricated, such as the winch frame, motor, drum, secondary brake and all of the electrical panels.

It took nearly all of the two weeks allotted for the parts to arrive, but in the meantime software was developed and electrical panels were wired.  Once all mechanical components were in the building, it took less than 8 hours for complete assembly, into the evening to integrate electrical components and load testing the next day.  Finally, two weeks after the receipt of the order, the client was notified, their winch was ready for delivery.

This 1 ton zero fleet angle winch has a drum that carries 2 separate runs of 3/8” wire rope for both redundancy and to keep the screen from spinning.  Through the use of absolute encoders and an IWEISS’ Alevo control system, the client has the ability to move the load to any number of predetermined targets, as well as adjust many of the system’s parameters from the LCD touch screen at the operator’s station.

This job was just one of many examples of how IWEISS can provide solutions that otherwise may seem impossible.