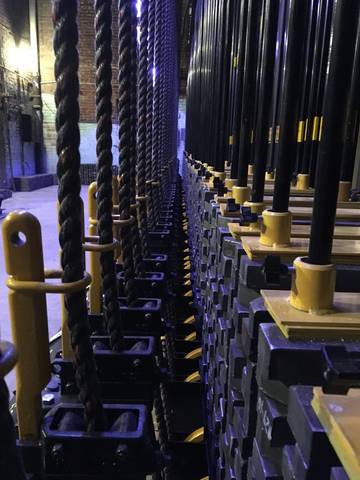 Washington’s historic National Theatre, founded in 1835, has operated as a hemp house for 182 years. Thanks to a dedicated crew of talented stage hands, countless Broadway productions were successfully mounted and run for all that time. However, Executive Director Sarah K. Bartlo-Chaplin realized that in today’s cost conscious competitive producing environment, efficiency was going to be key in landing not only longer running shows but also one and two night stands. “We need to load in and load out quicker and more cost effectively”.
So in preparation for Tina Fey’s Mean Girls opening, the decision was made to convert the theatre from hemp to counter-weight rigging. IWEISS Vice President Richard Parks and Project Manager Russ Dusek made a presentation to their Board, guaranteeing the work and the time frame and IWEISS was contracted to take on the job.
Under PM Russ Dusek and local foreman John “Chip” Daley, demolition began on July 10th. Before installing the new rigging – IWEISS’ Align Equipment – modifications and additions were made to the structural steel, electrical conduits and sprinkler lines were re-routed and a new load bridge was installed. (60) Double Purchase sets were installed on 6” centers with the rail above the stage floor allowing for maximum stage space. In addition we installed a new Clincher Winch and trip system for the fire curtain. The new Align rigging was commissioned 69 days later on Sept 17th.
E.D. Bartlo-Chapin wrote “…what a sincere pleasure it was to work with your PM Russ Dusek. Even given the unique circumstances of this project, Russ was always incredibly responsive and respectful…He (and the IWEISS team) are the reason the system got completed on time”Trivia fact – During demolition 8 tons of sand were removed from the theatre’s sand bag system of counter weight.