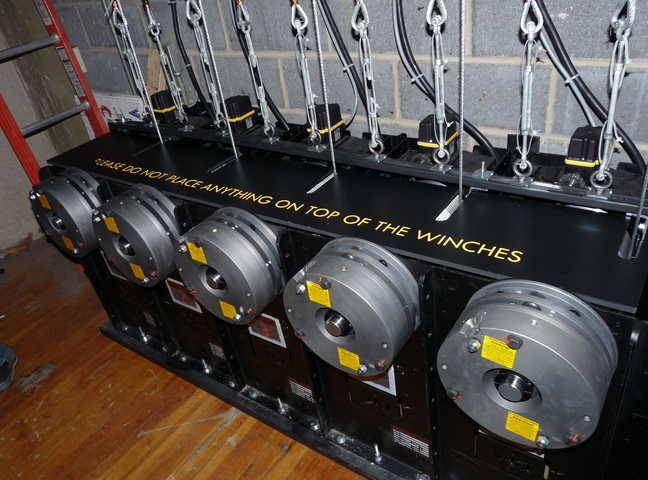 We have enjoyed a long history with The Riverside Church in New York City. One of the largest Neo-Gothic style cathedrals in the United States, it contains three performance spaces – all of which we have worked in.

The first- The Riverside Theatre- hosts numerous dance and arts festivals and its stage is a traditional proscenium equipped with counter weight rigging. While we were on an annual rigging inspection of this venue, the Church staff asked us to take a look at the rigging in both the Assembly Hall and the South Hall, the other two performance venues. Both were found to be in rather bad, even dangerous condition. We quickly went to work with the staff to determine the use and needs of each space as well as their budgets. IWEISS was able to come up with 2 very different solutions to meet the requirements and needs of this large facility to make each venue efficient and marketable.

For the smaller gothic style Assembly Hall, we simply removed the existing rigging and re-installed dead hung pipes to current safety codes. A dead hung batten system allowed the space to continue its function as a thrust theatre and new curtains provided a warm backdrop and acoustic dampening for the vast stone pillar filled hall.

For the South Hall (62’w x 86’ with a proscenium stage at one end) there was great opportunity for rental income if the operation of the rigging could be simply and safelyautomated within a reasonable budget framework. IWEISS, in conjunction with our structural engineer, designed a system employing 15 of our motorized ViaWinchesmounted where the old wire guided arbor system had once resided on the stage. As the staff wanted to restrict the movement of line sets as to only to operate only one at a time, a power and control raceway was built enabling all 15 motors to have a soft start and stop while being controlled from single wall mounted ViaControl MAX station. The controller senses the load on each lineset as well as the total load on the rigging steel to prevent over loading the system and structure.

With the cooperation and help from Riverside’s General Manager, Cristin Downs, two successful installations were completed bringing the performance spaces up to current standards.