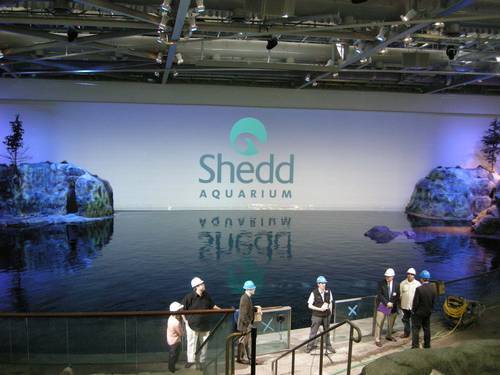 The Shedd Aquarium in Chicago recently re-opened its doors after a 50 million dollar – nine month long renovation. Part of this project was the new amphitheatre featuring the multimedia marine mammal show “Fantasia”. The theatre provides additional seating, better sightlines, and the latest in audiovisual technology including a projection system that projects images up to 110’ wide and 20’ high onto a 500’ wide x 33’ high motorized white curtain, arguably the largest curtain in the US, fabricated by IWEISS. This curtain double functions as a light-block along the glass wall overlooking the lake, and can be dropped into view or raised out of sight in under 30 seconds, acting much like an enormous roman shade. It consists of a white face layer, made with 1,760 yards of White Encore, and a separate blackout liner of equal size. Both operate in unison on the same 38 lift lines with a total of 1,216 D-Rings. In order to support high definition images the curtain needed to be as taught possible when in the down position. This was achieved with 16,000 feet of stiffener pipe sitting in 16,000 feet of pipe pocket sewn in (16) 500’ rows on the back of the curtain and liner. Curtain and liner weigh 8,000 lbs. In order to make fabrication, packing, and shipping of such a heavy piece manageable, the curtain was fabricated in five sections with heavy duty coil zipper seams. These zippers allowed the installers to attach the panels seamlessly to each other without having to sew the panels together on site. While fabricating and transporting a curtain of this size is difficult in itself, working with that much white fabric presented an additional challenge. In order to keep the white curtain as clean and as dust-free as possible we wrapped most of our sewing shop in plastic and quarantined dedicated sewers behind plastic walls while pausing all production involving darker fabrics. But – six samples, one curtain, one liner, 1,735 man hours and six shipping crates later the curtain was safely on its way to Chicago and life at IWEISS returned to normal. The curtain and motorized rigging system were designed and installed by Chicago Flyhouse. More marine mammal projects.